2017 / Lithuania, Germany / 70 min
In Lithuanian with English surtitles
Touring version in English as a singing language will become available in 2019

Sandy beach in a bright summer light is covered by vacationers, lying on their colorful towels. Mosaic of different stories, narrated by singing bodies gradually grow into the global chorus of one ecosystem. The beach is observed from the solar perspective, from above, as if mankind were bugs. Under the topology of lazy holidays – burning time and burning skin – there is a hidden intuition of the end: temporality of human bodies, as well as the body of earth. 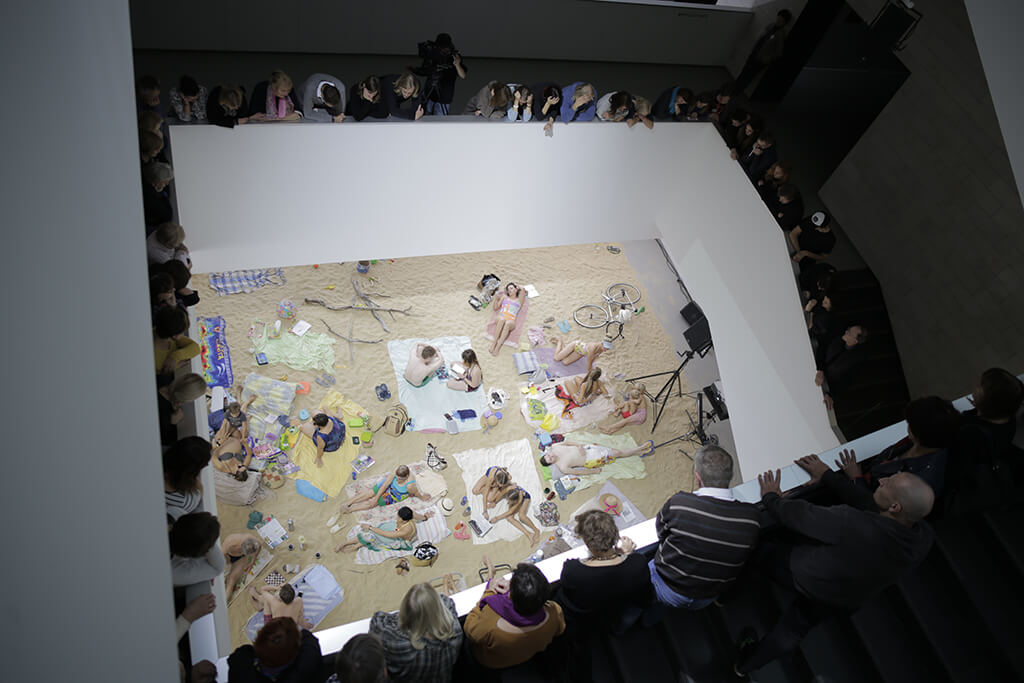 Authors of opera “Sun and Sea” in their collaborative work put special attention on the relationship between documentation and fiction, realism and poetry, as well as on the crossover of theatre, music and fine arts. Their first work – contemporary opera “Have a Good Day!” (2013) got 6 prestigious awards and was shown in international music, theater and opera festivals in USA, China, Germany, Switzerland,  Netherlands, Portugal, Estonia, Latvia, Russia, Ukraine and more than 10 international theatre festivals in France; opera was also broadcasted on National Radio and BBC3 Radio. The project “Sun and Sea” was supported by Akademie Schloss Solitude on the occasion of artists’ residencies in 2016/2017. In 2018 artists were invited to work at Staatsschauspiel Dresden theatre. The three authors will represent Lithuania for the Venice Biennale of Art in 2019 with opera-performance Sun and Sea.

Rugilė Barzdžiukaitė (b. 1983) works as filmmaker and theatre director, based in Lithuania. She completed her MA in Screen Documentary at Goldsmiths, London (2013), BA in Cinematography (2006) and Theatre directing (2008) in Lithuanian Academy of Music and Theatre. In her creative works, Rugile explores the gap between objective and imagined realities, while challenging an anthropocentric way of thinking in a playful way. Her recent full-length documentary “Acid Forest” – anthropological-philosophical research on how humans accept other species and vice versa has a wold premiere in Locarno Film Festival in 2018.

Vaiva Grainytė (b.1984) is a writer, playwright, and poet, engaged in interdisciplinary theatre projects. Latest works – collaborative site specific performance “Lucky Lucy” (2016), radio plays “Axis deviation” (2015), and “Witches do not eat gummy bears” (2015) evince the main qualities of her oeuvre: biographical and collective memory, daily routine and social issues are in equilibrium with poetic, slightly absurd, ironic and surreal overtones. Her book of essays “Peking Diaries” was nominated for Book of the Year 2012 and shortlisted as one of 12 of the most creative books in Lithuania.

Lina Lapelytė (b.1984) is an artist and musician living and working in London and Vilnius. Her performance-based practice is rooted in music and flirts with pop culture, gender stereotypes, aging and nostalgia. Her works are fueled by expression, marked by pastiche and grotesque, contextual and conceptual musicality, theatrical suggestibility, stylized visuality. Her latest performance works Ladies (2015), Hunky Bluff (2014) and Candy Shop – the Circus (2013/2015) were shown in different contexts and locations including the Serpentine Pavilion in London, the Queen Elizabeth Hall in London, the Venice Architecture Biennial and MACBA (Barcelona).